Accordingly, I've been enjoying nature's splendor with such delight for the last three months that I've almost forgotten my own duties to this blog... fuck, it's almost summer!

The proliferation of flowers, leaves, insects, and human activity that blooms forth in spring packs such an inspirational punch that my mind, ears, and pen have been going non-stop! Writing has been an almost daily ritual, putting an actual PEN to real paper.

A thought occurs: in jazz circles, we are far too often using destructive adjectives to exclaim our appreciation for the performance of other musicians:

My experience of music I love is LIFE AFFIRMING. It is NURTURING & NOURISHING. It is a GIVER of LIFE, not a DESTROYER of life.

I am curious what that kind of adjustment in vernacular could do for the way this music is received by the public, or how it might even subtly impact the choices a musician makes, the goals one has in performing for others...

Perhaps thoughts such as "I hope I am totally killing on this gig tonight" could be replaced with "I want to play nourishing, life-affirming music for people tonight"!

Maybe the compliments we give one another could reflect this nurturing approach, too. This would require a level of vulnerability that might be uncomfortable for awhile, but ultimately would have a profoundly positive effect for the culture that surrounds this music.

Some folks argue that words are just symbols, and carry no meaning...

If we care to communicate with others, we care about these symbols and what they say to others.

We curate our words and thoughts, just like we curate our choice of instruments, notes, tone, venues, and everything else that comes together make our artistic statements.

Rituals...morning coffee and a sunny stroll through the neighborhood. Watching my cats run around in the morning, and enjoying the stillness in their afternoon naps... all while thinking, percolating, taking care of emails & phone calls, booking gigs, making flyers, practicing, teaching, preparing, reflecting. It's all happening.

Practicing...dealing with issues related to sound, articulation, and motion around the saxophone...I love this!

But I also care about you: the Reader. The Listener. The Audience.

You are like me, and I am like you. We have our own experiences this world, but we are intrinsically connected with one another. As such, part of my struggle in keeping up with the blog is that I have been holding myself accountable for being more present in the real world!

Making real connections with real humans, just for the sake of connecting with humans...no strings attached. Talking, laughing, working through it all together. If we aren't careful we'll lose those connections...oftentimes, we do lose them. So...

Letting go of the need to "BE someone" and just simply connecting with the world around you is magical. Do it as often as you can, unapologetically!

With that in mind, we are three months further into the year, and I have some reflections on life, music, the scene in Baltimore, and the concert series that is almost halfway over at this point in time!
____________

The Windup Space
The Windup Space in Baltimore was a wonderful performance venue, bar, art space that hosted innumerable social circles, concerts, game nights, and gatherings since 2008. The venue's visionary owner, Russel De Ocampo, just announced they will be closing their doors on June 1st of 2019.

This is a huge loss for our city's thriving arts communities, and yet it reminds us all that we are living in a time of transition, and it is up to all of us to take responsibility for the way things evolve from here.

It is up to us to create and sustain connections with other people and artists that are able to weather these kinds of changes. This is something I have been taking very seriously in 2019, and there will be more essays here exploring what that looks like, and how to take action in the face of fear and self-doubt.

The Windup Space played an incredible role in the development of a scene of improvising musicians in Baltimore, and made an indelible impact on my own development as a both a musician & human being (not that I could ever be one without the other...)  This was not the only role Windup played for Baltimore's art community, but it is the one that had the most profound effect on my own life. I played my first improvised performance in there, curated my first concert there, debuted my first composition, played countless gigs with countless bandleaders, organized and performed my 30th birthday concert in there, and more. The list goes on. I got to know folks like Ellery Eskelin, Susan Alcorn, Michael Formanek, Tony Malaby and more in that room...So many friends & connections made. Most of them grew out of a series called "Out of Your Head".

We are halfway through my concert series in 2019 already, and it has been a wild ride!
I have learned so much about my own playing, and the role that a venue plays in the unfolding of our music. Not only the acoustics of the room (though that is very important) but also the context of the room - is this a listening space, a bar, a community center, or what? What does the audience expect in this space? How can I use all of that to my advantage? What can I offer to this space that might not happen without me? What's the give and take? This kind of attention in curating makes the music better, and makes the consumption of the musical experience better for the audience. Both are important!

I have found in booking this concert series - mostly acoustic improvised music in a designated listening space, selling tickets to people for an opportunity to listen uninterrupted - that my attention to detail is deepening. I am listening to the other musicians with more compassion. I am able to communicate with more vulnerability than in the past. It is a very enriching and life-affirming experience.

Interestingly, when I perform in other contexts now, I feel I am able to "say more" on these other types of gigs, because my heart is so full as a result of fulfilling my dreams in this curated setting. Being a LEADER has many advantages that ripple out into other facets of our lives and careers!

This lightens me up, and frees up a lot of energy to have more fun on the kinds of gigs that I used to play exclusively, in rooms that might have more ambient noise, chatter, and bustle from other people.

**I will have videos up on the internet from each of these concerts soon, but there has been much to keep up with. Thank you for your patience. I will update this particular blog entry with those videos when I have them** 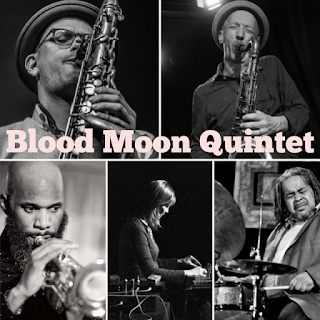 This might have been the most successful concert I've ever presented, and sparked new connections with the good folks as WEAA, Morgan State Radio. Shout out to Doc Manning & Robert Shahid, thank you for your time and attention, and for all you do! This was also the first concert I've played with friend and mentor Ellery Eskelin, who is one of my favorite tenor players of all time, and a Baltimore native, himself. The Energy brought together by these five unique voices, all patiently cultivating an atmosphere and an arc in the music over two hour-long sets was something to behold.
__________________________________________ 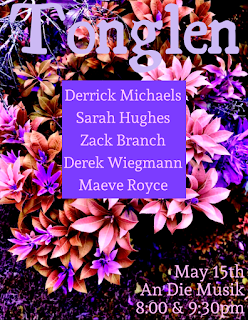 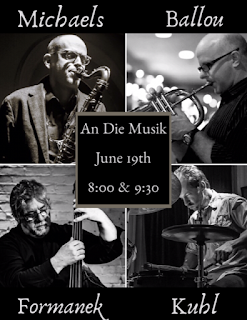 Still to come - these three musicians have been huge influences on my music, and on the scene that surrounds them on both local and international levels!

This will be a 2-day run with this quartet, and I will be making my Rhizome DC debut, on a double-bill with Susan Alcorn on Pedal Steel Guitar on the 20th of June!! 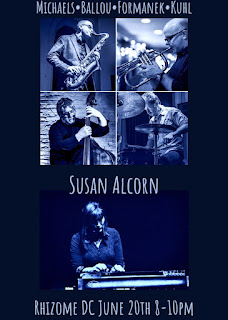 Stay tuned, and thank you for your attention!

The Purpose of Music

An Die Musik with Dave Ballou-trumpet & Michael Formanek-bass "What is the job of a musician?” This is one of many rhe... 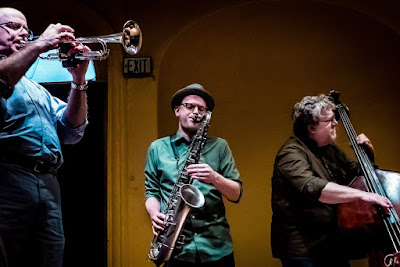